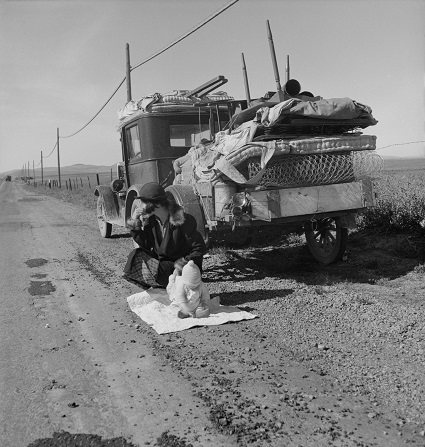 The coronavirus collapse has the potential to be worse than the Great Depression of the 1930s.

Law firms, especially small and midsize ones, need to start making plans that they hope will never be needed. The most important questions might seem to be hypothetical at this point, but they must be asked now, not once the economy "opens up" again.

Noah Smith published a deeply thought-provoking article in Bloomberg Opinion this morning: How Bad Might It Get? Think the Great Depression. This piece and its importance to law firms -- especially smaller ones in the United States -- make a subcription to Bloomberg.com worth the price all by itself. [1]

Mr. Smith points out three factors that might quality the current pandemic-triggered recession, if it continues, as a depression, with potential economic and human tolls that rival the Great Depression of the 1930s. Measured by unemployment, the United States has already reached unemployment rates close to those in the Great Depression. Each of these suggest that the economic dislocation might not be as temporary as politicians say:

Mr. Smith says, "This means that unless virus suppression regimes give people confidence that coronavirus isn't a threat to their personal safety, they're unlikley to come out and shop even if the government says there's no need to worry. Because effective treatments probably won't be available at least until the fall or later, that means many more months of business devastation except in the few competent and lucky places that get test-and-trace systems in place."

Mr Smith expects that the most likely scenario is that many countries will struggle to recover, which in turn could hurt U.S. exports and international investors for years to come.

Mr. Smith points out that a common criterion for distinguishing a depression from a recession is that a depression involves years of financial industry dysfunction and declines in lending.

These raise three critically important questions that law firms need to be considering now, not only after things more or less return to normal. More specifically, law firms need to get reliable information and insights about how each of these three depression risks might affect their clients.

To Mr. Smith's three points, we would add a fourth factor: the demonstrated competence of government responses to date. To what extent, if at all, is it reasonable to expect that governments and central banks will respond competently and in time to manage the three factors in Mr. Smith's article, which concludes on a note that is somber and, at the same time, a call to action for law firm leaders and managers:

"Although the U.S. government can and should do its umost to ensure that the coronavirus recession doesn't check all the boxes for a depression, its powers to stop both the virus and the international slowdown are limited. Let's hope that this depression won't last a decade, but an unprecedented slump followed by years of pain seem inevitable."

We believe that one of the major factors, especially in the United States, will be the extent to which governments since the 1980s have dismantled that social safety net and its supporting regulatory infrastructure or otherwise have allowed it to decay.

We hope that Mr. Smith is wrong about this, but prudence demands that law firms start collecting information from clients, move up to a heightened state of alertness about the economic consequences that are likely to unfold in the next six to nine months, and begin developing medium-range and long-range contingency plans for a legal services market that might very well resemble that of the Great Depression.

We can help you and your colleagues address these questions. Contact us at This email address is being protected from spambots. You need JavaScript enabled to view it..

[1] Disclaimer: Neither the author nor Walker Clark LLC have any financial interest in or relationship with the Bloomberg organization, other than as a website subscriber.